Be thankful to Rep. James Lyons who made a very public demand for the numbers by refusing to leave the House chambers until the Patrick administration released the information.  Now we know why the governor has been stonewalling on Lyons’ request since May:

The 58-year-old Andover Republican — who bucked Beacon Hill by holding a sit-in in the House chambers two weeks ago — pried the shocking report from state officials. It showed that nearly 55,000 illegal immigrants received more than $93 million in MassHealth benefits for emergency medical services last year.

I don’t want to hear another word about looming budget cuts or teacher layoffs when the state is spending close to $100 million a year on free health care for people who are here illegally.

Ten years later it is still as horrifying, heartbreaking and infuriating.  May God continue to bless the souls of those who were murdered and the loved ones they left behind.

The Little Spitfire and I took a stroll to the farmer’s market yesterday and spotted this raaacist sign on a side street. 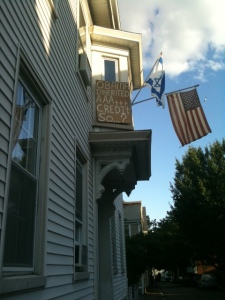 It’s the one thing Obama won’t whine about inheriting.  I hope it offends many liberal tourists as they get ripped off at the “witch” attractions.  The Israeli flag might just send some of them over the edge.  BWAAAHAHAHAHA!

Can you say epic fail?  And it gets even better.  While the man child was losing followers, Republican Senators gained 6,500.

I guess the 37,000 didn’t appreciate the barrage of tweets throughout the day.  For example:

Exit quotation from one Twitter user who got tired of being spammed: “I just unfollowed @barackobama seemed like a good #compromise.”

They don’t call him Flipper for nothing.

Kerry didn’t reveal his change of position during a news conference, like he called last week in Boston to air his views about the federal debt negotiations.

He didn’t do so in a speech on the floor of the US Senate, like he delivered with evident pride last month after Boston Bruins won the Stanley Cup.

He came out, if you will, in a more inert fashion last March, when his staff answered a survey from a Globe reporter inquiring about whether members of the state’s congressional delegation favored gay marriage and the repeal of the federal Defense of Marriage Act.

An aide, relaying answers Kerry gave during a brief phone call from an international trip, said yes to both survey questions.

When a story – about how gay marriage was no longer a political wedge issue – appeared in the newspaper a week later, a condensation mistake resulted in the senator’s job title and first name being left off a sentence reading, “A Globe survey of the Massachusetts congressional delegation shows support for gay marriage and for repealing the Defense of Marriage Act by Kerry and each of the Bay State’s House members, all Democrats.”

How far the high and mighty have fallen.

WASHINGTON — The number of people who applied for unemployment benefits last week rose by the most in a month, signaling growing weakness in the job market.

Applications rose by 9,000 to a seasonally adjusted 429,000 last week, the Labor Department said Thursday. It was the second increase in three weeks and the 11th straight week that applications have been above 400,000.

More dismal economic news.  But don’t you worry…according to Barry, it’s just a bump in the road.

The 1.4% drop came a day after the market broke its longest losing streak in more than a year.

The market’s last seven-week stretch of losses began in May 2001, as the dot-com bubble deflated.

Stocks have suffered this month after a raft of weak economic news dampened hopes for a speedy recovery. Traders fear that weaker hiring, industrial output, and a moribund housing market are reversing a bull market that lifted the Dow Jones industrial average 20% the past year.

The network, citing sources, said the Department of Justice has given the go-ahead for Edwards to be prosecuted and the former politician has been informed of the development.

Edwards may now accept a plea deal or face trial.

Edwards, 57, has been the target of a lengthy federal grand jury investigation into allegations of campaign violations related to his relationship with mistress Rielle Hunter.

The corrupt apple doesn’t fall far from the tree.

In case you missed it, the White House banned the Boston Herald from full access to Obama’s fundraiser in Boston today because the Herald ran an op-ed by Mitt Romney on its front page on the same day of the Messiah’s visit here back in March.

The White House Press Office has refused to give the Boston Herald full access to President Obama’s Boston fund-raiser today, in e-mails objecting to the newspaper’s front page placement of a Mitt Romney op-ed, saying pool reporters are chosen based on whether they cover the news “fairly.”

“I tend to consider the degree to which papers have demonstrated to covering the White House regularly and fairly in determining local pool reporters,” White House spokesman Matt Lehrich wrote in response to a Herald request for full access to the presidential visit.

Howie Carr, a Herald columnist, was livid and went ballistic on his radio show today.

Makes you wonder what Obama’s internal poll numbers are showing in a matchup with Mitt, doesn’t it?

MSNBC’s Lawrence O’Donnell sides with the Herald.  No, your eyes are not deceiving you.

O’DONNELL: The Herald says it made a request to send a pool reporter to today’s events. Pool reporters provide information to the rest of the media when there’s limited access at a press event. The Herald said in turning down their request, White House spokesman Matt Lehrich mentioned the Romney op-ed from the last time President Obama was in town. Lehrich’s email to the Herald said in broken English, “I tend to consider the degree to which papers have demonstrated to covering the White House regularly and fairly in determining local pool reporters.” Good luck trying to diagram that sentence. “My point about the op-ed was not that you ran it but that it was the full front page which excluded any coverage of the visit of a sitting President of the United States to Boston. I think that raises a fair question about whether the paper is unbiased in its coverage of the President’s visits.”

You know you’ve really stepped in it when you have the likes of Lawrence O’Donnell calling out your stupidity.

SPITFIRE MURPHY
Create a free website or blog at WordPress.com.