Some of you may not be familiar with Massachusetts State Senator Scott Brown who is running for what should be Ted Kennedy’s vacant Senate seat.   Below is profile of Senator Brown. I think you’ll like what you read.

“This Senate seat doesn’t belong to any one person or political party,” he says. “It belongs to the people, and the people deserve someone in the U.S. Senate who will always put their interests first.” He knows he’s an underdog and will be outspent 10 to 1 by an opponent in the Jan. 19 special election. (He’s likely to face Jack E. Robinson, a perennial wannabe, in the Dec. 8 primary.) “I was an underdog and prevailed in nine previous races,” he tells me. “I learned to be competitive and use our resources wisely.” 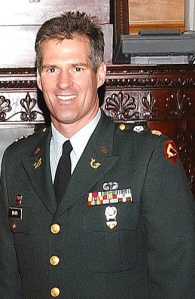 Scott Brown is not your ordinary Beacon Hill pol. At 50, he’s tall, lean and has the physique of a triathlete, which he is. Having spent nearly 30 years with the Massachusetts National Guard, rising to the rank of lieutenant colonel in the Judge Advocate General’s Corps, his manner is open and straightforward. “I’m not beholden to special interests,” he says. “Because I don’t owe anybody anything, I’m free to tell the truth and fight for what I believe in.”

He says government is too big, and stimulus spending made it bigger instead of creating jobs. “We can’t afford a second stimulus package,” he says. “The first one didn’t work. The money wasn’t spent well in Massachusetts because the governor is using it as a campaign tool.” He says taxes, already too high, will go even higher if Democrats in Congress continue with their out-of-control spending. He says “the historic amount of debt we’re passing on to our children and grandchildren is immoral.” He knows from experience that power concentrated in the hands of one political party leads to bad government and poor decisions. He supports term limitations: “A maximum of four terms and you’re out.”

Senator Brown would give voice to the legions of us who have felt cast off and unrepresented by our Congressional delegation for decades – or since birth in my case.  He would make the citizens of the Commonwealth proud.  We should do everything in our power to support his campaign.  I encourage you to join the Brown Brigade and get involved.  Imagine the shock and awe if Massachusetts elected a Republican senator?