Friend of Angelo Chris Dodd is in big trouble. 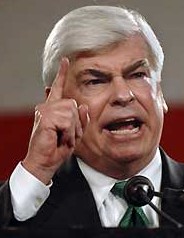 Former GOP Congressman Rob Simmons is still his toughest opponent, leading Dodd 48% to 35%. Seven percent (7%) prefer some other candidate in this contest, and 11% are undecided. Those figures are a slight improvement for Simmons since September.

The newest Republican in the race, Linda McMahon, the ex-CEO of World Wrestling Entertainment, earns 44% of the vote to Dodd’s 38%. Eight percent (8%) opt for another candidate, with nine percent (9%) not sure.

Long-shot candidate Peter Shiff, the widely-known president of Euro Pacific Capital, is essentially even with Dodd and holds a one-point edge, 40% to 39%. In their race, eight percent (8%) like some other candidate, and 14% are undecided

If Dodd loses he can always retitre to his little cottage in Ireland.

Disgusting, but not surprising in the least.

If you have kids in public school, ask them if Zinn’s Marxist book “A People’s History of the United States” has been forced on them by a social studies or history teacher.  I bet the answer will be in the affirmative.  If it is, contact the school and demand that they follow-up Zinn’s book with Bill Bennett’s “America: The Last Best Hope” Volumes I and II.  If the point is for alternate points of view, they should have no problem with this.