James P. Gannon of The American Spectator brilliantly sums up what is driving the anger across America and points out that the majority of those who are fed up are seething in silence.

It is the fury of the voiceless, the powerless, the ordinary nobodies of Flyover Country who are ridiculed, preached to, satirized and insulted by the Celebrity Loudmouths of the two Left Coasts, the Jon Stewarts and Keith Olbermanns, the Paul Krugmans and their ilk.

It is the salted wound of the millions who see that ruling Democrats in Congress are not listening to them but are willfully ignoring public opinion and the verdict of recent elections in passing a huge new health care entitlement when the existing entitlements of Social Security, Medicare and Medicaid are already going broke.

It is the frustrating helplessness of citizens who revere the Founding Fathers and the genius of the Constitution that they wrote, who actually believe the words of the Constitution mean what they say, not more and not less. They who watch politicians and the courts stretch and bend that Constitution — finding “rights” not enumerated, powers never granted, meanings unimagined — believe that their country is being redefined without their consent.

Most of the angry are not out marching in the streets, waving signs or shouting into bullhorns. And they are not smashing windows or phoning death threats to politicians. They are simply waking up angry in the morning, and going to bed angry at night. And their resentment is multiplied by the media’s efforts to portray them all as dangerous, crazy people, and by the effort of certain Democrats to tar them with brush of violent intent.

Read it all and be prepared for spontaneous fist waving.

So in the MSM and certain blogger’s minds that must make 50% of Americans raaaacists.

Last week’s jubilant signing of the health care overhaul, Obama’s signature domestic initiative, seems to have given the president little boost. Instead, his standing on four personal qualities has sagged, and 50% of those surveyed say he doesn’t deserve re-election.

In the survey last Friday through Sunday, the president gets tough treatment:

• Obama’s standing on four key personal qualities, including being a strong and decisive leader and understanding the problems Americans face in their lives, has dipped. For the first time since the 2008 campaign, he fails to win a majority of people saying he shares their values and can manage the government effectively.

• Twenty-six percent say he deserves “a great deal” of the blame for the nation’s economic problems, nearly double the number who felt that way last summer. In all, half say he deserves at least a moderate amount of blame.

Obama’s approval rating on handling the economy, foreign affairs and the federal budget deficit hasn’t significantly changed from February. It has risen a bit on health care, though he doesn’t get majority approval on any of the categories.

Can you imagine the numbers without the MSM cheerleading squad?

Bonus Graphic. Click to see how Barry The Most Merciful fares against past presidents when it comes to approval numbers

Watch this awesome video by Evan Coyne Maloney which takes us on a journey back to the Bush years when dissent was patriotic and it was cool to liken him to Hitler.

Evan has now produced a timely new video splicing together footage that he calls “A trip down memory lane.” He describes it as four minutes of nonstop examples of violent imagery and extremist rhetoric employed by left-wing anti-Bush protesters. He writes: “For some reason, despite it being well documented at the time by me and many others, the media chose to ignore it.” Indeed.

The teachers union in Massachusetts has once again put its self-serving needs before the children they are supposed to be educating.

The Obama administration bypassed Massachusetts yesterday in awarding the first grants for school innovation, a loss of $250 million for a state widely viewed as a national leader in education excellence.

Delaware and Tennessee won first and second, respectively, in the Race to the Top competition. Massachusetts ranked 13th out of 16 finalists, putting it below Georgia, Kentucky, and Louisiana but ahead of Colorado, New York, and Washington, D.C.

Massachusetts may have lost points for requiring union consent on enacting some plans to overhaul underperforming schools and for not changing state law to allow for unfettered growth of charter schools, according to the scores and written comments released yesterday by a five-member review panel.

Doing it all for the children.

What’s this?  The only arrest made in response to all of the so-called threats from the right is a lefty Obama supporter who threatened to kill a Republican.  And to further the Husky Blogger’s heartache, the guy might just be an anti-semite.

A Philadelphia man was charged Monday with threatening to kill Rep. Eric Cantor (R-Va.) and his family in the first such arrest since an outbreak of harassment and vandalism began against members of Congress more than a week ago.

Norman Leboon, 33, posted a YouTube video last week in which he threatened to shoot Cantor, the second-ranking Republican in the House, and his family.

An affidavit released Monday did not say why Leboon allegedly wanted to harm Cantor, the only Jewish Republican member of Congress, but in the video, he calls Cantor “pure evil.”

“Remember Eric . . . our judgment time, the final Yom Kippur has been given,” he says in the profanity-laced video. “You are a liar, you’re a pig . . . you’re an abomination. You receive my bullets in your office, remember they will be placed in your heads. You and your children are Lucifer’s abominations.”

Leboon gave $505 to Barack Obama‘s presidential campaign in 2008, according to Federal Election Commission records. The campaign plans to donate that amount to charity, according to DNC spokesman Hari Sevugan.

Another day, another blow to the narrative.  But don’t dismay Husky Blogger.  There’s always the Texas School Board, Sarah Palin or Glenn Beck’s “bad crazy” to focus on.

During the morning rush.

Two female suicide bombers blew themselves up Monday in twin attacks on Moscow subway stations jam-packed with rush-hour passengers, killing at least 38 people and wounding more than 60, officials said. They blamed the carnage on rebels from the Caucasus region.

About 45 minutes later, a second explosion hit the Park Kultury station, which is near the renowned Gorky Park. In both cases, the bombs were detonated as the trains pulled into the stations and the doors were opening.

The blasts come six years after Islamic separatists from the southern Russian region carried out a pair of deadly Moscow subway strikes and raise concerns that the war has once again come to the capital, amid militants’ warnings of a renewed determination to push their fight.

Chechen rebels claimed responsibility for a deadly bombing late last year on a passenger train en route from Moscow to St. Petersburg. Last month, Chechen rebel leader Doku Umarov warned in an interview on a rebel-affiliated Web site that “the war is coming to their cities.”

The first explosion took place just before 8 a.m. at the Lubyanka station in central Moscow. The station is underneath the building that houses the main offices of the Federal Security Service, the KGB’s main successor agency, a symbol of power under Vladimir Putin.

In case you have forgotten, it was Islamist Chechnyans who, in 2004, took a school hostage and then massacred hundreds of children in front of their parents. (Warning: Graphic images)

CNN:  “Hundreds of people, at least dozens of people – we haven’t gotten a count of how many people turned out there. We heard Sarah Palin talk about everything about the campaign, to unseat Sen. Reid to what she calls ObamaCare, on the heels of that health care vote and even talking about her definition of her love of America.” 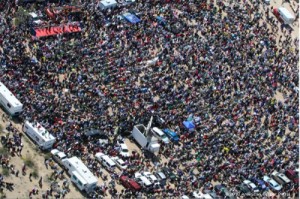 Is Rick Sanchez in charge of the counting at CNN?

SPITFIRE MURPHY
Create a free website or blog at WordPress.com.