In another sign that the American public has had it ‘up to here’ with illegal immigration and its toll on our society, 70% of Massachusetts!!! voters favor a law which would block illegal immigrants from receiving state benefits.

Seventy percent (70%) of Massachusetts voters favor a proposal recently rejected by the state legislature that would stop illegal immigrants from receiving public benefits.

The proposal failed to pass in the Democratically-controlled State House last month by a 75 to 82 vote.

Barry’s illegal immigrant Auntie Zeituni could not be reached for comment at her public housing project.

Snarlin’ Arlen is giving Martha (Marsha) Coakley a run for her money in the worst candidate evah contest.

The first time Sen. Arlen Specter (D-Pa.) slipped up here Tuesday night at the Allegheny County Democratic Committee’s Jefferson-Jackson Dinner, most in the audience pretended not to notice.

But at the end of his remarks when Specter again thanked the “the Allegheny County Republicans” for their endorsement, many couldn’t help but laugh nervously and shoot did-he-really-just-say-that looks at each other.

As amusing as it seemed to some of the Democrats in attendance, mistakes like that could end up costing him his job next Tuesday. It’s not that Specter is so precariously placed that he can’t weather the occasional gaffe, it’s that every little reminder of the 80-year-old’s Republican past chips away at his porcelain base in his new party.

“I think it’s not unusual for anybody to misspeak from time to time,” Specter shrugged to reporters after the dinner. “I’m not a television commentator. I’m not as smooth as you guys.”

No word on whether he called Terry Bradshaw a Patriots fan.

UPDATE: Specter is not having a good 48 hours.  He just snipped at Andrea Mitchell for asking why Obama is not coming to Pennsylvania to “help” his campaign.

“How can you even ask that question seriously, Andrea?” – Specter pushing back at Andrea Mitchell’s q’s about why Obama isn’t coming to PA.

Um, maybe because doesn’t want to be 0-4 when it comes to campaigning for losers?

This is the latest in the anti-Obama billboard series we’ve seen in recent months. 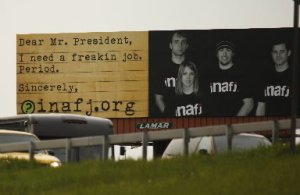 Leaky Lahey gives this childish response when pressed over whether he will push the White House to turn over Kagan’s memos from her days as counsel to Bill Clinton:

“I haven’t even thought about what I’m going to do,” Leahy said at first.

When pressed about the importance of mining memos from her four years at the White House to gain insight into her thinking on judicial philosophy and policy matters, Leahy, a Democrat from Vermont, became testy.

“I’ll tell you what. I think what is important is for you to let me run the hearing and we’ll let you know,” he said.

“I think it would be grandstanding on my part to try to tell you what I want to do before I even talk to the nominee,” Leahy added.

When questioned a third time, Leahy shot back: “Maybe you ought to chair the hearing,” before turning and walking into an elevator.

I know you are, but what am I?