Color me unsurprised.  This is the same fool who called the 9/11 attacks “a failure of human understanding” – on the anniversary of Islamic terrorists murdering 3,000 of his fellow citizens. 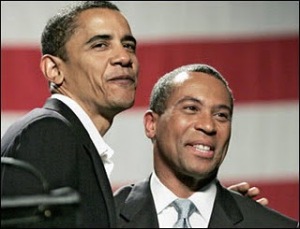 “The sooner we separate the peaceful teaching of Islam from the behavior of terrorists, the better for all of us,’’ Patrick said on WTKK-FM 96.9.

The 15-story mosque and cultural center are poised for approval after the New York City Landmarks Commission refused Tuesday to block redevelopment of the site.

“It’s poor taste to put it where they’re putting it,’’ said C. Lee Hanson of Easton, Conn., whose son, Peter, daughter-in-law, Sue Kim, and 2-year-old granddaughter, Christine Lee, all of Groton, died on United Airlines Flight 175. “They should just build it a mile away. There would be no problems.’’

The issue has caused bitter divisions in New York and has provoked strong emotions in Massachusetts, where the two planes involved in the attacks took off. Some local families of victims of the attacks have embraced the proposal for a mosque in Lower Manhattan as a symbol of religious tolerance, while others consider it unthinkably insensitive.