I’m guessing Rahm’s first day on the campaign trail was not what he had envisioned.

Can’t he just eat his eggs?

But as he wolfed down scrambled eggs and sipped coffee at Izola’s Restaurant on 79th Street with three patrons, some residents tried to interrupt, blaming the former White House strategist for a lack of jobs on the South Side. As the cameras rolled, Emanuel stood up and tried to quell the simmering scene, explaining how he felt the Obama administration had helped create jobs.

“You are going to be asked some hardball questions and get your bat out,” Paul Johnson, 49, eventually told Emanuel. “Welcome to Chicago.”

At which point, Rahm was making plans to send a dead fish to the person behind naming his first days on the trail the “Tell It Like It Is Tour” – Axelrod, perhaps?

Emanuel also visited Pilsen, where he met with United Neighborhood Organization CEO Juan Rangel, a strong ally of Mayor Richard Daley’s. Rangel said he wasn’t endorsing Emanuel but felt he was among several candidates who are qualified to be mayor. Emissaries from those campaigns also greeted Emanuel outside Nuevo Leon restaurant on 18th Street.

Supporters of U.S. Rep. Luis Gutierrez and former Chicago Public School Board President Gery Chico rallied around the restaurant catcalling as Emanuel made his way down the block. Some local activists also handed out fliers ripping Emanuel for being part of a White House that some feel hasn’t been active enough on immigrant rights.

“Gutierrez si! Rahm no!” several people chanted outside, while Chico’s supporters gathered signatures to get their candidate on the ballot.

“We’ll be ceding no ground to Rahm Emanuel or anybody else,” said Robert Reyes, a Chico spokesman.

Even potential rivals who weren’t there tried to pile on Emanuel, who has garnered national media attention for jumping into the local race.

“It’s a great restaurant visited by tourists,” said City Clerk Miguel del Valle, who has said he’s running to be mayor. “It’s a must stop for tourists, and I can understand why Rahm went there on his first day back.”

I think this photo sums up his reception perfectly: 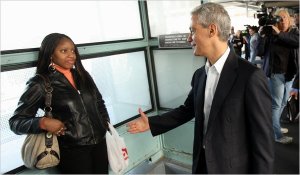 Politics is a tough game. And there are few venues where it is tougher than the genteel neighborhoods and blighted wards of Chicago where Democrats have been practicing their own brand of groin kicking, blackjack clubbing, kneecapping, means of persuasion since before Al Capone had Mayor “Big Jim” Thompson in his pocket.

Case in point: Obama’s opponents just got blindsided by a hard right cross to the chin. Consider what just happened to Arizona Senator Jim Kyle who made the mild, and eminently reasonable suggestion that since the stimulus bill wasn’t working, perhaps it was a good idea to suspend its implementation before we waste any more hundreds of billions in taxpayer monies.

According to Jonathan Martin of Politico, Obama struck back with true Chicago political thuggery:

Earlier this week, the administration launched a coordinated effort to jam Senate Minority Whip Jon Kyl, an Arizona Republican who’s argued that the government should “cancel the rest of the stimulus spending.” No fewer than four Cabinet secretaries wrote to Arizona Gov. Jan Brewer – also a Republican – to ask her if she agreed with Kyl that it was time to turn off the state’s stimulus spigot.
“If you prefer to forfeit the money we are making available to your state, as Sen. Kyl suggests, please let me know,” wrote Transportation Secretary Ray LaHood. For good measure, he attached a three-page addendum listing each of the Arizona projects paid for by the $521 million the state is getting.

Brewer knew she’d been thrown a high, hard one.

“The governor is hopeful that these federal Cabinet officials are not threatening to deny Arizona citizens the portion of federal stimulus funds to which they are entitled,” her spokesman said in a statement. “She believes that would be a tremendous mistake by the administration. And the governor is grateful for the strong leadership and representation that Arizonans enjoy in the United States Senate.”

Don’t blame Governor Brewer. Her reaction is the same as those unfortunates in Chicago who get this kind of treatment; grovel before the Machine. And note that Obama dispatched Ray LaHood, a nominal Republican, to do the dirty work. This also, is the Chicago Way; get a “friend” to slip the knife in if you can.

It is no accident there has never been a politician from Chicago elected president before Obama. The way the game is played there seemed too raw, too uncivilized for the national stage.