Just like the Holocaust Museum and Pentagon shooters, right?  Since James Jay Lee doesn’t fit the narrative for the Husky Blogger, we are told we must agree that some people are motivated to do crazy things simply due to mental illness. 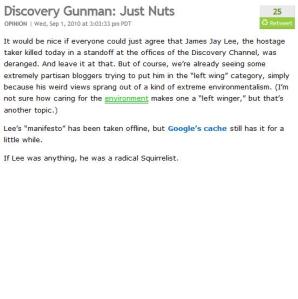 If anyone out there thinks for one nanosecond that if there was even the weakest whiff of a tie to any “bad crazy”, right-wing group or *gasp* the Tea Party, the Husky Blogger wouldn’t be posting thread after thread exposing the connection,  I have some 2010 LGF calendars to sell you.

I was finally able to download the rest of the pictures from the Tea Party on the Boston Common yesterday. 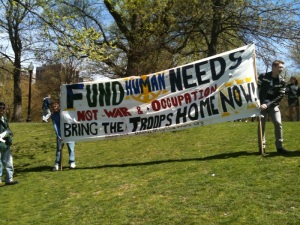 These people must have missed the memo that anti-war protests have fallen out of fashion since Obama’s election. 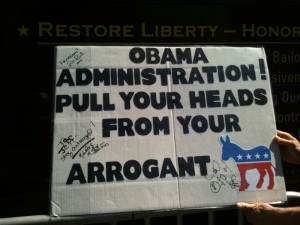 So angry.  It could incite violence… 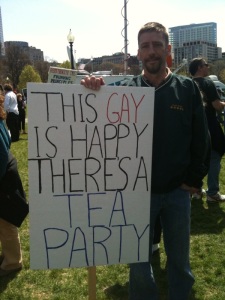 What’s this?  There goes your narrative, Comrade Keith. 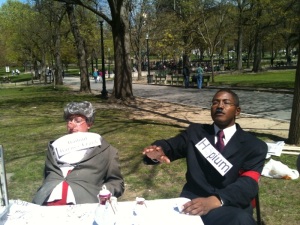 The only Hitler references/imagery came from the Lydon LaRouche DEMOCRATS.  That’s supposed to be Barney Frank sitting next to Barack H(itler) Obama. 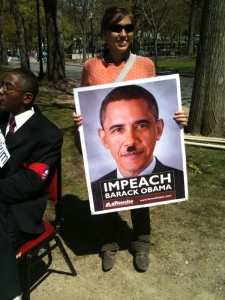 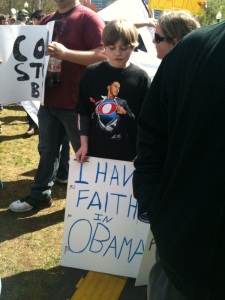 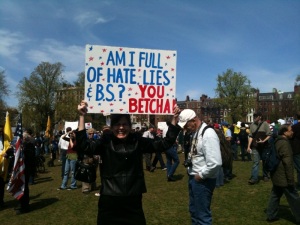 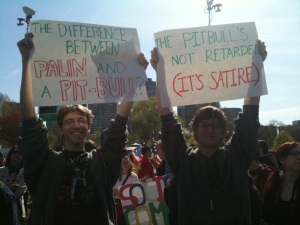 The kid on the left called me a retard and said he thought Obama’s Special Olympics joke was hilarious. 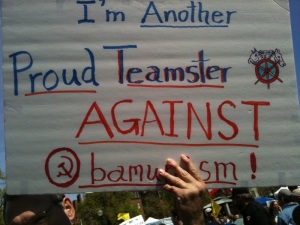 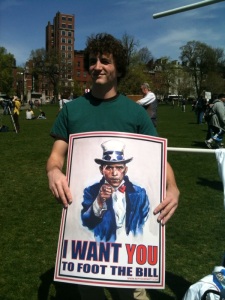 Clearly a raaaacist from Southie. 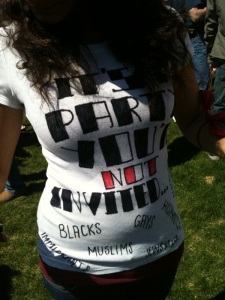 This young woman actually started crying when she couldn’t explain her t-shirt to me.  It might have had something to do with the (lovely) black Tea Partier standing next to me.  Or the gay man holding the pro Tea Party sign.  Or perhaps she was furious at herself for being caught up in a wave of disinformation provided by her college friends and felt like a total ass for wearing a shirt that made her look like an uninformed fool. 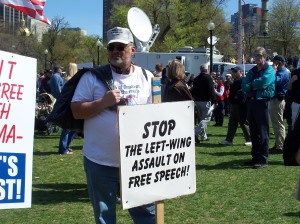 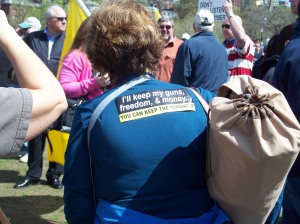 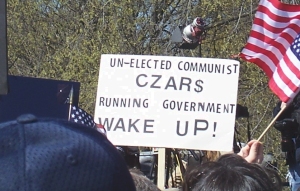 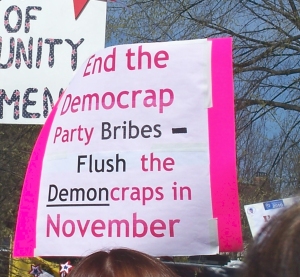 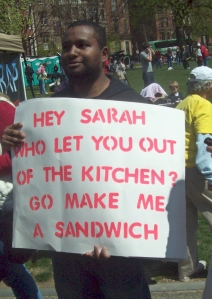 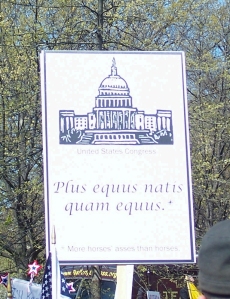 Watch this awesome video by Evan Coyne Maloney which takes us on a journey back to the Bush years when dissent was patriotic and it was cool to liken him to Hitler.

Evan has now produced a timely new video splicing together footage that he calls “A trip down memory lane.” He describes it as four minutes of nonstop examples of violent imagery and extremist rhetoric employed by left-wing anti-Bush protesters. He writes: “For some reason, despite it being well documented at the time by me and many others, the media chose to ignore it.” Indeed.

What’s this?  The only arrest made in response to all of the so-called threats from the right is a lefty Obama supporter who threatened to kill a Republican.  And to further the Husky Blogger’s heartache, the guy might just be an anti-semite.

A Philadelphia man was charged Monday with threatening to kill Rep. Eric Cantor (R-Va.) and his family in the first such arrest since an outbreak of harassment and vandalism began against members of Congress more than a week ago.

Norman Leboon, 33, posted a YouTube video last week in which he threatened to shoot Cantor, the second-ranking Republican in the House, and his family.

An affidavit released Monday did not say why Leboon allegedly wanted to harm Cantor, the only Jewish Republican member of Congress, but in the video, he calls Cantor “pure evil.”

“Remember Eric . . . our judgment time, the final Yom Kippur has been given,” he says in the profanity-laced video. “You are a liar, you’re a pig . . . you’re an abomination. You receive my bullets in your office, remember they will be placed in your heads. You and your children are Lucifer’s abominations.”

Leboon gave $505 to Barack Obama‘s presidential campaign in 2008, according to Federal Election Commission records. The campaign plans to donate that amount to charity, according to DNC spokesman Hari Sevugan.

Another day, another blow to the narrative.  But don’t dismay Husky Blogger.  There’s always the Texas School Board, Sarah Palin or Glenn Beck’s “bad crazy” to focus on.

The Husky Blogger is at it again.  He just knows the Pentagon shooter, John Patrick Bedell, was a far-right, Tea Partier because…he hated George W. Bush.  But that’s not all.  The Husky Blogger purports to link Bedell’s audio rant to a website he has never posted at because his words sound like comments that would be posted there.

These statements show an extreme right wing libertarian, the kind of person who posts comments at the Campaign for Liberty website. Hatred for George W. Bush is widespread among this group, so the fact that he was anti-Bush definitely does not put him in the “left wing” camp — as many wingnut bloggers seem desperate to do.

That’s quite a leap, but not at all surprising for someone who believes there are Neo-Nazis lurking in the background at all Tea Parties and drops the race card more often than Al Sharpton and Jesse Jackson combined.

To sum up, Bedell’s party registration tells you absolutely nothing about where he lies on the political spectrum. His actual words, however, paint a very clear picture of an anti-government right wing extremist of the Ron Paulian persuasion.

So in the Husky Blogger’s ponytailed head, Bedell was a pot-smoking, 9/11 truther who happened to be a registered Democrat who also happens to be far-right, Ron Paulian, Tea Partier even though there is no proof whatosoever of any connection to Ron Paul, “far-right” groups or the Tea Party movement.

Because he says so.  Got it?

Welcome to the world of cognitive dissonance that reigns supreme at that place.

And now I bid you adieu.

Twice in less than a week’s time the Husky Blogger’s hopes have been dashed as two psycho killers just don’t fit the tea-bagging, racist, homophobic profile he longs to find in every such instance.  The latest example gone bad is Joseph Stack – the man who intentionally flew a plane into an Austin, Texas office building filled with federal IRS employees today.

Stack in his own words:

As government agencies go, the FAA is often justifiably referred to as a tombstone agency, though they are hardly alone. The recent presidential puppet GW Bush and his cronies in their eight years certainly reinforced for all of us that this criticism rings equally true for all of the government. Nothing changes unless there is a body count (unless it is in the interest of the wealthy sows at the government trough). In a government full of hypocrites from top to bottom, life is as cheap as their lies and their self-serving laws.

My introduction to the real American nightmare starts back in the early ‘80s. Unfortunately after more than 16 years of school, somewhere along the line I picked up the absurd, pompous notion that I could read and understand plain English. Some friends introduced me to a group of people who were having ‘tax code’ readings and discussions. In particular, zeroed in on a section relating to the wonderful “exemptions” that make institutions like the vulgar, corrupt Catholic Church so incredibly wealthy. We carefully studied the law (with the help of some of the “best”, high-paid, experienced tax lawyers in the business), and then began to do exactly what the “big boys” were doing (except that we weren’t steeling from our congregation or lying to the government about our massive profits in the name of God). We took a great deal of care to make it all visible, following all of the rules, exactly the way the law said it was to be done.

There, there Husky Blogger.  Surely there must be a new Tea Party-Stormfront connection lingering out there just waiting to be unearthed by your favorite fishy race detective.

What’s this? A left-leaning, Harvard-educated professor lost her sh*t (for at least the second time) and went on a shooting rampage?  But the Husky Blogger told me it’s always tea-bagging, racist, homophobic, right-wing extremists who commit such acts.

A family source said Bishop, a mother of four children – the youngest a third-grade boy – was a far-left political extremist who was “obsessed” with President Obama to the point of being off-putting.

I know the type.

Can we all agree that people who snap do so because they are nuts and not because of their political ideology?  I know this dispels the theory of the Husky Blogger and others, but they have plenty of other storylines (e.g.: raaaaacists) to write about ad nauseum.

I wonder if she’ll request to be buried in her Obama t-shirt after she is fried by the state of Alabama?