They don’t call him Flipper for nothing.

Kerry didn’t reveal his change of position during a news conference, like he called last week in Boston to air his views about the federal debt negotiations.

He didn’t do so in a speech on the floor of the US Senate, like he delivered with evident pride last month after Boston Bruins won the Stanley Cup.

He came out, if you will, in a more inert fashion last March, when his staff answered a survey from a Globe reporter inquiring about whether members of the state’s congressional delegation favored gay marriage and the repeal of the federal Defense of Marriage Act.

An aide, relaying answers Kerry gave during a brief phone call from an international trip, said yes to both survey questions.

When a story – about how gay marriage was no longer a political wedge issue – appeared in the newspaper a week later, a condensation mistake resulted in the senator’s job title and first name being left off a sentence reading, “A Globe survey of the Massachusetts congressional delegation shows support for gay marriage and for repealing the Defense of Marriage Act by Kerry and each of the Bay State’s House members, all Democrats.”

How far the high and mighty have fallen.

Trustafarians always balk when it’s time to put their money where their mouths are.  Howie Carr lays it all out as only he can in his column today.

Your average liberal would give an illegal alien the shirt off your back. Not his back, but your back. Just ask them. They sit in Starbucks and angrily blog about how AmeriKKKans who work don’t pay their “fair share.”

They harrumph, what about the children?

So far this tax season, the state Department of Revenue has received 1,971,000 returns.

And of those 1.971 million filers, exactly 862 have checked the box to pay at the old, higher 5.85 percent rate rather than the current 5.3 percent rate.

Of course, this is an old tradition in Massachusetts, liberals running up the tab and then when the check arrives — hey, come back here you ponytailed carpetbagger! They play the political equivalent of the old chew ’n’ screw. And I don’t just mean their heroes, such as Sen. John Kerry, with his $7 million yacht, the SS Deadbeat. Or the assorted state solons loading up on booze and smokes in tax-free New Hampshire.

We already know the most liberal states contribute the least to charity per capita. The louder the liberals talk about the need to pay more, the faster they flee from helping out the most vulnerable members of society who fell through the safety net shredded by George W. Bush, etc. etc.

But . . . but . . . we all know that with their trust funds and their no-heavy-lifting jobs at the colleges and the Globe and WGBH, most moonbats are living high on the hog. So maybe these 862 people are coughing up big bucks.

I love the smell of hypocrisy in the morning.

Fredo is on a roll.  First he calls the Tea Party and Republicans “extremists” in his lame Delawow! fund raising email,  then he turns around and implores the very same people he insulted to support the doomed Disclose Act. Now he’s blaming the uninformed rubes of the electorate for his party’s epic failures.  Not exactly a winning strategy, but nobody ever called Fredo the sharpest knife in the drawer.

“We have an electorate that doesn’t always pay that much attention to what’s going on so people are influenced by a simple slogan rather than the facts or the truth or what’s happening,” Kerry told reporters after touring the Boston Medical Center yesterday.

“It just continues the Democrats’ theme that the reason people are upset is because they don’t understand. They’re not smart enough. That sort of rhetoric just gets people even more upset,” said Jacobson.

Kerry made the remarks on voters following questions about U.S. Rep Barney Frank’s re-election campaign and queries about securing federal funding for the Hub hospital.

“I think a lot of the anger today – while it’s appropriate because Washington is broken – is not directed at the right people,” said Kerry. “Barney is prepared, as others are, to explain what we’re doing. I think when people hear the facts and they see what we’re doing, it frankly makes sense.”

In the interview, Kerry added that voters should be mad at stonewalling Republicans and “big money” in politics instead, referring to a bill blocked by Republicans Thursday that would reveal corporate and union leaders who fund big-bucks political ads.

He went on to blame the legislative logjam in Washington, D.C., for fewer federal dollars sent to the state.

Yesterday, Scott Brown announced he would vote against the Democrats’ thinly veiled attempt to influence the midterm elections in the name of the Disclose Act.  John Kerry, the Fredo Corleone of the Massachusetts Senate delegation,  begged the Tea Party and GOP to go along with the scam.

Senator Scott Brown criticized the bill, and Democrats for trying to move forward with it.

“Americans, especially those looking for work, want this Congress and this administration focused on job creation and getting the economy back on track,” the Massachusetts Republican said in a statement. “Putting people back to work should be our number one priority, not pushing through a wildly unpopular campaign bill that gives a tactical advantage to the majority party in future elections.”

Poor Fredo.  Michael has spoken.  Now go entertain some of your senator friends in Cuba.

Update:  Disclose Is Dead…for now.  Even the Maine Twins saw this bill for what it is.

Yesterday, John Kerry took some time off from cruising on his $7 million dollar yacht to send out a fund-raising email bashing the Tea Party and Sarah Palin. 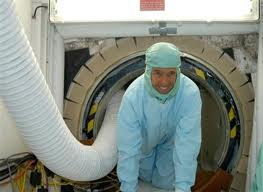 U.S. Sen. John Kerry yesterday mocked Republicans as “Sarah Palin’s party” even as the New Hampshire Senate candidate she backed claimed victory in Tuesday’s primary and a Tea Party favorite emerged as the GOP’s best hope to break the Democratic stranglehold on the Bay State delegation.

“I think the Tea Party couldn’t ask for any better publicity than to be denounced by a millionaire who dodges paying taxes on his yacht,” said conservative gadfly Glenn Reynolds of Instapundit.

“The news from Delaware is crystal clear: It’s Sarah Palin’s party now,” Kerry wrote in a fund-raising e-mail titled “Delawow!” distributed yesterday. “We have to fight back. Click here to contribute right now to make sure we defeat the Tea Party extremists.”

But conservative Washington observers said Republicans will get the last laugh come November.

“Kerry is the guy whose political instincts are always wrong. This guy’s presidential campaign was a punch line,” Reynolds said. “To call the Tea Party extremists is a joke.”

GOP analysts reveled in big conservative wins Tuesday, including Kelly Ayotte – graced by Palin with one of her coveted “mama grizzly” endorsements – who snatched a primary victory over Tea Party favorite Ovide Lamontagne.

Among GOP challengers to the Bay State’s all-Democrat congressional delegation, Republican state Rep. Jeff Perry – beloved by local Tea Partiers – is given more than a fighting chance of winning the seat being vacated by Democratic U.S. Rep. William Delahunt.

How inspiring.  If the Democrats are relying on Captain Botched Joke to rally the troops, then they are in even worse shape than we thought.   Keep it up, Dems.  Pretty please.

Still in damage control mode, Kerry sat down for a whiney interview with the Boston Globe and couldn’t help being his usual pompous, out of touch self.

WASHINGTON — Senator John F. Kerry yesterday acknowledged for the first time that he mishandled the political fallout from questions about taxes on his new $7 million yacht berthed in Rhode Island, but insisted that he always intended to make the $500,000 payment once he had registered the boat in Massachusetts.

“Our fault,’’ the Massachusetts Democrat said in an interview. “I don’t think I dealt with it fast enough, effectively enough. There’s nobody to blame but myself for that.’’

Last Friday, Kerry issued a less-than-definitive statement about the matter, saying, “If I owe taxes, I will pay promptly.’’ That was followed over the next few days by a series of similar comments, fueling a stream of media reports about whether the senator was trying to dodge Massachusetts taxes.

Then, on Tuesday, Kerry said he would deliver a check for roughly $500,000 — “whether owed or not’’ — to the Massachusetts Department of Revenue to quell the controversy.

Kerry, during a 45-minute session with Globe reporters, repeatedly insisted that he never had any intention of permanently docking the yacht in Rhode Island to avoid paying taxes in Massachusetts.

Asked why he had not paid taxes earlier, he said he has not taken final ownership of the yacht because there were several changes still being made by a designer, whose team is based in Rhode Island. Thus, he said, he was not in a position to pay taxes in Massachusetts.

He said, however, that he could now take possession within days — possibly soon enough to go sailing this weekend. He insisted he always intended on paying taxes after taking possession, notwithstanding the conditionality of his earlier statements.

He goes on to be very defensive about his wife’s inherited money.

“Look, we don’t feel like we have anything, either of us, to apologize for, to people,’’ Kerry said. “Because you know, the happenstance of death and accident and tragedy leaves my wife with a certain amount of money. . . . She doesn’t have to apologize for wanting to have good moments on a sailboat with her family.’’

Those were the last words heard from John Kerry before he slammed the door of his chauffeured SUV (must be a family member’s) after being pummelled with questions from reporters regarding his $7 million yacht’s suspicious registration in tax-free Rhode Island. 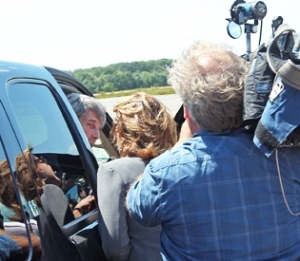 Sen. John Kerry, hounded by questions over whether he is dodging state and local taxes on his ultra-luxe $7 million sailing yacht, yesterday slammed his car door on a pack of reporters demanding to know if he would pony up to the cash-strapped commonwealth.

“Can I get out of here, please,” the harried senior senator said before sailing off into the sunset after an event at the former South Weymouth Naval Air Station .

Kerry continued to insist that he and his wife, ketchup heiress Teresa Heinz, would pay whatever taxes they owe on his new New Zealand-built Friendship sloop Isabel, but wouldn’t specifically address whether he’d cough up some $500,000 in state use and local excise taxes.

When asked yesterday whether he had brought the Isabel into Massachusetts, Kerry replied, “It depends on who owns it.”

Kerry declined to elaborate and a spokesman didn’t respond to our query, leaving us to wonder whether the senator is looking for another legal loophole to sail through.

Typical liberal.  Taxes for thee, but not for me.

Too bad he’s not up for reelection this year.  Still, it’s another reason to Remember in November.

With his reputation on the rocks, Sen. John Kerry informed Bay State tax collectors today he will cough up some $500,000 in state and local taxes for his ultra-luxe yacht Isabel.

“As we’ve said from the beginning, we have always complied with tax laws and we always will. … The payment is being made promptly,” Kerry said in a statement to the Herald today.

“We’ve reached out to the Massachusetts Department of Revenue and made clear that, whether owned or not, we intend to pay the equivalent taxes as if the boat’s home-port were currently in Massachusetts,” Kerry added.

As if it were in Massachusetts?  Come on, Senator.  Is that another botched joke?