Be thankful to Rep. James Lyons who made a very public demand for the numbers by refusing to leave the House chambers until the Patrick administration released the information.  Now we know why the governor has been stonewalling on Lyons’ request since May:

The 58-year-old Andover Republican — who bucked Beacon Hill by holding a sit-in in the House chambers two weeks ago — pried the shocking report from state officials. It showed that nearly 55,000 illegal immigrants received more than $93 million in MassHealth benefits for emergency medical services last year.

I don’t want to hear another word about looming budget cuts or teacher layoffs when the state is spending close to $100 million a year on free health care for people who are here illegally.

Not only is this Godforsaken state paying for methadone (synthetic heroin), but they are providing chauffeur driven Town Cars to the clinics.

BOSTON (CBS) — The state is strapped with a $2 billion budget deficit, yet it’s spending millions of dollars on chauffer driven rides to methadone clinics.

An I-Team investigation found that day in and day out, chauffeur driven livery cars make the trek to local methadone clinics with recovering heroin addicts and other drug users on board.

Most of the passengers are members of MassHealth, the state medical plan once known as Medicaid, and it is an expensive trip when there’s only one person in the passenger seat. Expensive for the taxpayers, that is, who are paying the fares.

“The word has got out now that MassHealth is pretty much a free taxi service,” said one professional driver who asked the I-Team to hide his identity.

“Why would you want to use your own gas and your own car when you can just call MassHealth and get a luxury ride to Boston in a Lincoln Town Car?” said the driver, who used to work for a livery service that contracts with the state.

“I found myself doing taxi work, basically picking up people and shuttling them down to Canal Street in a luxury vehicle,” the driver said. “I’ve done as many as five or six trips in a week and I’m just one person.”

Courtesy of you and me. 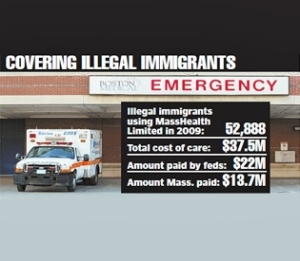 Beleaguered Bay State and U.S. taxpayers coughed up a staggering $35.7 million this year in free emergency health care for more than 52,000 illegal aliens in Massachusetts, sparking outrage from candidates and critics who back a tougher line on immigration.

The figures — released by Gov. Deval Patrick’s administration under an order for the Secretary of State’s office and after more than a month of ducking questions — show illegal immigrants who belong to MassHealth Limited received $33.8 million in taxpayer-funded in-patient hospital care this year.

They also made 6,160 visits to the state’s overburdened emergency rooms in the fiscal year ending in June for an additional cost of $1.9 million, a Herald analysis shows.

And how’s this for breathtaking arrogance?  Cadillac Deval won’t let anyone from his admininstration talk about the  rage-inducing numbers.

The Patrick administration, which supplied the figures last week, refused to make state health insurance officials available to discuss them.

But critics were quick to blast the huge medical bill being footed by hard-pressed, law-abiding taxpayers.

Added state Rep. Robert Hedlund (R-Weymouth), “It’s just another example in this state of working people paying the bills, and some people availing themselves of the benefits we have in the commonwealth.’’