Looks like the White House has embargoed Barry after Plugs and The Pants Suit made fools of themselves with their contradicting statments on the crisis in Egypt over the weekend.

Amidst the growing tensions inside Egypt, the Obama administration is increasingly shutting reporters out at the White House.  This seems to be the underlying American subtext to the Egyptian crisis and has many reporters wondering if the White House has forgotten about protocol or more importantly, transparency.  The administration is now blocking reporters from standard events where they may come into contact with President Obama.  The White House’s actions smack of a virtual media blackout and have many journalists wondering if the White House is simply trying to block media access to the president so as to insulate him from having to answer questions on Egypt.

The matter has raised the ire of the White House Correspondents Association (WHCA).  Earlier today, the WHCA’s board issued a letter to White House Press Secretary, Robert Gibbs, lodging a formal complaint over the lack of press access and release of information.

Update:   NRO’s Jim Geraghty makes a great point in today’s Morning Jolt.  Unless it’s all about Himself, Barry doesn’t like to be bothered with the media.

As a candidate, and at times as president, Obama can be appallingly ubiquitous; since becoming president, Obama has appeared on The Tonight Show with Jay Leno and The Late Show with David Letterman, taped a question-and-answer promoting Conan O’Brien’s transition to The Tonight Show, taped a promotion for George Lopez, taped a video for The Colbert Report, taped a prime-time special with Oprah, been the subject of an NBC News prime-time special, been the subject of an HBO documentary, grilled with Food Network star Bobby Flay, popped up in commercials during Thanksgiving football, filled out his NCAA basketball tournament picks on ESPN, and been on American Idol. (Twice.)

And yet when somebody tried to blow up a flight over Detroit on Christmas, Obama stayed away from cameras for three days. Mid-summer of last year, as the Gulf oil spill worsened and his administration’s response came under fire, Obama went into bunker mode. The only time Obama doesn’t want to speak to us is when we actually want to hear what he has to say.

Update via Morning Jolt which is an entertaing daily must-read written by National Review’s Jim Geraghty. Sign up here.

It wasn’t supposed to be funny, but members of the White House Press Corps couldn’t help themselves.  They were reacting to the following statement from Robert Gibbs:

“This is the most transparent administration in the history of our country.”

It looks as though the love affair between Obama and the reporters who cover his administration has soured.

President Obama and the media actually have a surprisingly hostile relationship – as contentious on a day-to-day basis as any between press and president in the last decade, reporters who cover the White House say.

Reporters say the White House is thin-skinned, controlling, eager to go over their heads and stingy with even basic information. All White Houses try to control the message. But this White House has pledged to be more open than its predecessors – and reporters feel it doesn’t live up to that pledge in several key areas:

— Day-to-day interaction with Obama is almost non-existent, and he talks to the press corps far less often than Bill Clinton or even George W. Bush did. Clinton took questions nearly every weekday, on average. Obama barely does it once a week.

— The ferocity of pushback is intense. A routine press query can draw a string of vitriolic emails. A negative story can draw a profane high-decibel phone call – or worse. Some reporters feel like they’ve been frozen out after crossing the White House.

— Except for a few reporters, Press Secretary Robert Gibbs can be distant and difficult to reach – even though his job is to be one of the main conduits from president to press. “It’s an odd White House where it’s easier to get the White House chief of staff on the phone than the White House press secretary,” one top reporter said.

— And at the very moment many reporters feel shut out, one paper – the New York Times – enjoys a favoritism from Obama and his staff that makes competitors fume, with gift-wrapped scoops and loads of presidential face-time.

And he hasn’t held a press conference in over ten months.  The next one should be very interesting.

What a difference a year can make.

But the laughter has been reduced by half in recent months: In the first six months of the Obama administration, briefings produced an average of 179 laughs per month. Over the past six months, the average has dropped down to 89.

Mason also reports frustration in the ranks: “Reporters know how close the press secretary is to the president, and yet the quality of the information we get doesn’t often reflect that.”

Chalk it up to the close of any administration’s initial honeymoon — and the Obama administration’s tough second half of 2009, as it wrestled with health care and saw the late Ted Kennedy’s U.S. Senate seat filled by a Republican. 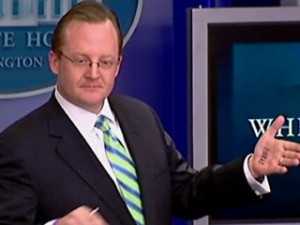 “The tone is one reason for less laughter,” says American Urban Radio’s April Ryan. “There are lots of serious questions begging for serious answers. Those questions do not meld with laughter and light banter.”

But there’s also some frustration a-brewing among press corps members.

“There definitely aren’t a lot of laughs around the briefing room these days,” says Washington Examiner White House correspondent Julie Mason. “Robert’s little digs and evasions have lost their power to amuse — particularly since we haven’t had a presser since July.”

Even Dough Boy Gibbs’ latest use of the podium to mock Sarah Palin was met mostly with groans from the once enamored club.

The thrill is gone.