This is good news, of course, for the state’s many defense contractors, and there’s no questioning the importance of these assignments. Brown, a former army JAG lawyer, will have a chance to build on his knowledge of defense-related issues and, over time, play a substantial role in foreign policy.

The problem is that his fellow Massachusetts senator, John Kerry, is already exerting maximum clout on foreign policy as chairman of the Senate Foreign Relations Committee, meaning that the state’s Senate delegation is tilting too far overseas. Kerry’s specialty in foreign policy worked well when he was partnered with Edward Kennedy, who was the leading domestic-policy legislator of his time. From his perch on what is now called the Health, Education, Labor, and Pensions Committee, Kennedy influenced much of social policy for the last half-century. He also tended assiduously to Massachusetts’ giant health-care industry, directing billions of federal dollars a year to local hospitals and laboratories.

Yeah, that John Kerry is a powerhouse of accomplishments in the foreign policy arena.  I wonder if they include faux covert missions to Cambodia in their list?

The Globe can’t stand the fact that Scott Brown beat Martha Coakley and that Massachusetts is at long last being represented by someone who understands the very real threats our country faces and the need for a strong national security policy.

To borrow a phrase from their Messiah, Barack Obama.  Sorry, but we won.

State Sen. Scott Brown has pulled a Massachusetts miracle and has upset his Democratic rival to capture the open U.S. Senate seat by a 7 point margin.

Brown, 50, of Wrentham, will roll into Washington as the nation struggles with health-care reform. But Brown has vowed to be “the 41st Senator” that will defeat the measure.

Democrat Martha Coakley, the state’s attorney general, has gone down in defeat. Brown has won 53-46 percent, with more than half the precincts reporting.

We did it!  The people of Massachusetts sent a message to the corrupt hacks on Beacon Hill who have ruled with impunity and disdain for the citizens of the Commonwealth, to the elite, drunk with power, Democrats who look down on the people of this great country, ignore our will and wish to remake America into a socialist nanny state.  The message was clear: NOT ON OUR WATCH!

Lets savor this victory tonight and tomorrow we continue the good fight.  That means you, Deval.

The day we have been waiting for has finally arrived.  Although the polls show Scott Brown with a lead, we must take nothing for granted and fight until the very end.  That means YOU Massachusetts voters.  Get out and vote –  find out if your relatives or neighbors need a ride to the polls and get them there.  Hell, if you need a ride to the polls and you live within an hour of me I’ll drive you myself.  Send me an email at spitfire.murphy@yahoo.com.

The number for the Brown campaign HQ is 781-444-0200 – they will make sure anyone and everyone who wants to vote has a ride to the polls.

This is our chance to let our voices be heard and to send a message to the hacks on Beacon Hill and the machine in Washington D.C. that there is a new day dawning in America and we will no longer sit back while our government ignores our will with impunity.

As Scott Brown so eloquently put it during the debate, this is The People’s Seat.  We, the people deserve a voice.  Let your voice be heard today!

With Scott Brown sitting in the audience, no less

“I certainly didn’t realize that this was a rally for Martha,” said Brown. “I think it’s inappropriate to ask for people’s votes when they’re trying to remember Martin Luther King Jr.”

Coakley was invited by event organizers to speak at the Hynes Convention Center breakfast. Brown sat in the crowd with supporters. He said he was not invited to speak.

“We are in the middle of a very close election. I know that people are frustrated. They’re angry. They may be focusing that in many different ways,” Coakley said during her remarks.

“Do not forget they were problems that were not created by, but inherited by our president Barack Obama,” Coakley said.

Coakley has hit bottom and continues to dig.

In response to Obama’s snide statement yesterday that “anybody can own a truck,” Scott Brown points out the obvious to Captain Clueless.

Brown took that opportunity to slam the president on government spending..

“Mr. President, unfortunately in this economy, not everybody can buy a truck,” Brown said in a statement. “My goal is to change that by cutting spending, lowering taxes and letting people keep more of their own money.”

Speaking of trucks – we are in the midst of a nasty snowstorm here in Massachusetts.  The truck driving Brown supporters will be able to get out and campaign for theircandidate while Coakley’s clown car driving supporters will be stuck in snowbanks.  Assuming they even leave the house in this weather.

I just returned from Scott Brown’s The People’s Rally in Worcester.  Thousands of supporters waited outside holding signs, waving flags, cheering, chanting “GO SCOTT BROWN” while cars drove by laying on their horns, hanging out the windows with their Brown signs.  They opened the doors and (according to an usher’s estimate) a lucky 300o of us got in.  The overflow crowd walked over to the Crowne Point hotel to watch via video, unlike the Obama/Coakley event at Northeastern in Boston where they couldn’t even fill the room.

There is no way I can adequately describe the mood in the hall.  The people were so fired up – it was electric!  The lineup went as follows:

Video of his speech here.

Transcript of his speech here.

I was able to get some pictures, but my camera is a hunk of junk so the quality isn’t great.

Brown supporters swarming the bus outside the hall 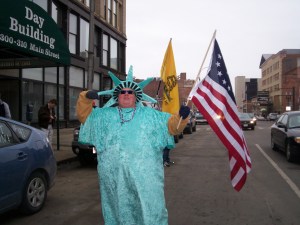 This guy was a crowd favorite! 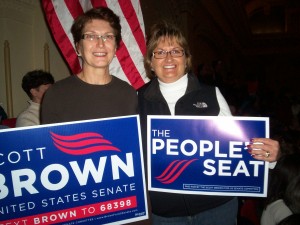 I met these lovely ladies inside – they are sisters.

Brown after the rally, signing autographs (I got one!)

Brown with a young supporter (who says only the Democrats get the youth vote?) 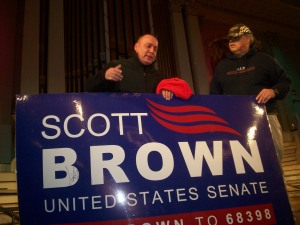 This is a UNION guy voting for Brown

Martha Coakley was greeted by plenty of Scott Brown “stalkers” at events in Gloucester and Newburyport today.  I was at both events.  It is difficult to put into words the enthusiasm I witnessed today.  The last time I can remember seeing anything like this was when the Red Sox won the World Series and people everywhere were fired up and wanted to express their excitement.

Scroll for special thanks to the Beverly Farms Brown Brigade!

There is only one way to get to Chamber which includes passing through a four-way intersection.  There were Coakley supporters there, but they were outnumbered by the Brown Stalkers.  At the Chamber, Coakley had to walk through a crowd of  the aforementioned stalkers holding Brown signs, waving American flags and chanting “GO SCOTT BROWN.”   She looked a tad rattled.  When the event ended, Coakley left in her tinted window sedan to the same chants and crowds. 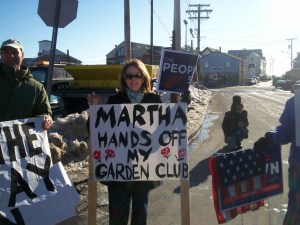 Outside the Chamber of Commerce

This guy was a Coakley stooge.  Staring people down trying to look menacing

This is Roxy The Republican

This is Andy from Rockport.  His son is currently serving in Afghanistan. 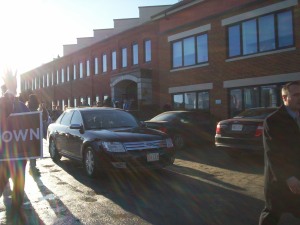 My camera was acting funny here so I only got a few shots.  The restaurant is on the harbor with a bridge looking down on it.  Sea of Brown supporters on the bridge and at the entrance to the restaurant (where there were many empty parking spaces).  The entrance is next to another intersection. Brown folks on all corners, honking, yelling, thumbs up in the hundreds.  No Coakley sign holders to be found.  Again, Coakley drove in, addressed the “crowd” inside and left without getting out to shake hands…in the cold.

More to come if I can get this camera working again.

update:  special thanks to the young Patriots who were canvasing Beverly Farms today and gave my husband a Scott Brown t-shirt!  I will be wearing it with pride to the rally in Worcester tomorrow.  You guys rock! 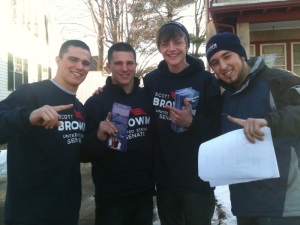 The cherry on top of the sundae?  It’s the Cambridge Police.  You know, the ones who acted “stupidly” according to Obama?

Legal Insurrection notes that Coakley’s campaign has frequently trumpted her husband’s status as a retired Cambridge police officer which makes this extra delicious.

The Cambridge, Massachusetts police officers association wants to clear up the record. Just because Martha Coakley’s husband is a retired Cambridge police officer, a fact which her campaign frequently mentions, they do not want you to think that they actually support Coakley.

No, the Cambridge police officers association, at the insistence of its membership, has endorsed Scott Brown for Senate (emphasis mine):

Members of our Association have inquired and requested that we endorse Scott Brown in the upcoming election against Martha Coakley.

Ms. Coakley along with some of her campaign workers have talked publicly about how her husband is a retired Cambridge Police Officer, giving appearances that she is being endorsed by the Cambridge Police. This may be an innocent insinuation but most do take this as our giving her our support and endorsement.

We do not endorse anyone who advocates changes in the health care that take away any bargaining rights or increases our cost along with our contributions. Senator Brown does not support the Comprehensive Healthcare Reform Bill and promises to be the 41st vote to ensure its defeat. The current leadership at the state house, as we all know and have seen over the past two years, have an agenda to dismantle all of our hard earned bargained benefits and they will continue to dismantle these until there is a complete change from the top down. Martha Coakley is part of this Massachusetts leadership and she will continue with this agenda, only now it will be at the capital level and we need to stop it.

So today, we the members of the Cambridge Police Patrol Officers Association endorse Scott Brown for the senate seat vacated by Senator Kennedy.

Sgt. James Crowley has to smiling to himself right now.

Special Envoy to Haiti, Bill Clinton, came to Boston today to campaign for Martha Coakley in the midst of a humanitarian crisis in Haiti.  The event took place at the posh Fairmont Copley in the Back Bay.  This while Haitians are suffering through a living hell.  I wonder if this will make the Haitian community in Boston more or less likely to vote for Coakley on Tuesday. 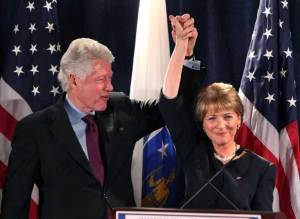 The pictures speak for themselves.

It would be oh-so sweet if Brown carries Southie.  It is the home of countless MA Hacks (D), the most famous being Billy Bulger (AKA The Corrupt Midget) whose serial killer mobster brother, Whitey, is on the FBI’s Most Wanted List.